Burning Waste Coal is Much More Polluting than Burning Coal

What is waste coal?

Waste coal piles accumulated mostly between 1900 and 1970. The piles look like hills or small mountains that are dark and barren. Hundreds of millions of tons of waste coal and rock litter the landscape in mining states.

Why is it a problem?

Where is waste coal being burned?

There are currently 18 waste coal burning power plants, and 13 more that use it as a secondary fuel, with bituminous coal as their primary fuel. Fourteen of the 18 waste coal plants are in Pennsylvania. Over a dozen more are proposed, mostly in PA, WV and KY. There are also now proposals for coal-to-oil refineries, some of which would use waste coal to produce liquid fuels.

Nationally, waste coal has an average of 60% of the BTU value (British Thermal Units, a unit of energy) of normal coals. It can take up to twice as much waste coal to produce the same amount of electricity. This means that -- in most places -- waste coal burners can only be economically built where huge volumes of waste coal exist. It would cost too much to truck far-away low-BTU fuel to a centralized burner. Consequently, even if waste coal burning were a clean solution, it wouldn't deal with the problem of more isolated waste coal piles.

[This is based on thousands of samples collected in 1999 by the U.S. Environmental Protection Agency. Click here for more details on mercury content in coals and waste coals.]

Data on other metals in waste coal is sparse, but evidence from single metals tests on Pennsylvania culm and gob show both to have about 4 times as much chromium and 3 times as much lead.

Where Does the Mercury Go?

Combustion creates problems that simply don't exist if the waste coal is left unburned. Anytime you burn coal or waste coal, polycyclic aromatic hydrocarbons (PAHs) are created that were not present in the unburned waste coal. Polycyclic aromatic hydrocarbons have a range of toxicity. Any time you burn anything with less than complete combustion, you also create nitrogen oxides (NOx) and products of incomplete combustion (PICs). Since the number of possible PICs is unlimited, the potential toxicity of the PICs is uncertain.

Burning waste coal doesn't make the waste go away. If 100 tons of waste coal are burned, 85 tons will remain as waste coal ash.

Since far more mercury and other toxic contaminants enter a waste coal burner to produce a given amount of electricity, these high levels of toxic contaminants have to come out somewhere. Toxic metals cannot be destroyed by burning them. To the extent that they are captured in pollution controls (protecting the air), they are then concentrated in the highly toxic ash that ultimately threatens the groundwater wherever this ash is dumped. Waste coal burners have cleaner air emissions than antiquated coal plants due to their better pollution controls, but this only means that the ash is far more toxic, since the highly toxic particulates captured in pollution control equipment end up in the ash. The industry claims that 99.8% of the mercury in the fuel is captured and ends up in their ash.

Waste coal ash is dumped in communities not far from the waste coal burners, threatening the groundwater with leaching lead, mercury and other poisons. Power plant waste is allowed to be dumped without the basic protections (landfill liners) that are required for dumping household trash. When burning any solid fuel, the resulting ash has a higher surface area than the raw, unburned material. The dangers of toxic leaching from ash can be expected to be greater than from the unburned waste coal. Just like with coffee, running water over coffee grounds leaches far more coffee out than if you ran water over whole coffee beans.

The industry claims that by injecting limestone into the ash, the ash becomes impervious to leaching. However, this has not been proven and it seems likely that the alkaline affects of the lime would afford only temporary protection, especially since the region where most of the waste coal burners are (Pennsylvania, West Virginia) suffers from the nation's worst acid rain.

The waste coal burning industry's own data shows that waste coal ash does in fact leach metals into groundwater, despite their public assertions. Ash at 2 of 12 facilities studied in Pennsylvania were shown to contain levels of arsenic higher than the maximum allowable concentration set forth for land application of sewage sludge. Of 221 samples of leachate from waste coal ash at the ash dumps, lead contamination in 23 samples (10.4%) exceeded a level 10 times higher than EPA's maximum contaminant level (MCL) for drinking water. Six samples exceeded this "10 times the drinking water standard" level for cadmium, as did single samples for chromium and selenium. 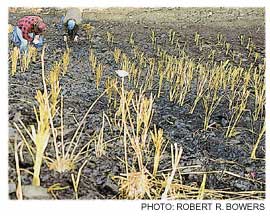 Researchers at the Natural Resources Conservation Service found a very cheap and viable alternative to the conventional waste coal pile remediation method of grading, topsoiling, seeding and mulching. They found that beach grass, native to sandy beaches, thrives in waste coal piles and can establish enough plant cover to enable native plants to take root. This method has been shown to bring life back to long-dead waste coal piles for only 6-10% of the cost of conventional methods. Within a few years, beach grass enabled native plants to take over, allowing organic matter to accumulate around plants, forming a plant layer that stopped erosion, held water, cooled the surface, and looked better.

The waste coal industry argues that the best solution to waste coal piles is burning them, while other cleaner and safer alternatives exist.

Rather than liberate the toxic contaminants by burning them, it is preferable to remediate the waste coal piles in a way that reduces the problems associated with the piles without creating new problems.