Biomass Fuel Subsidies to be Capped in U.K.

Biomass Fuel Subsidies to be Capped in U.K. 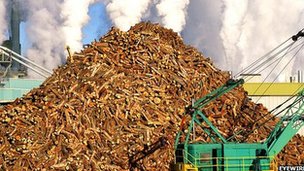 The government is turning away from its controversial policy of subsidising UK power stations to generate electricity from burning wood.

It is proposing that subsidies for bespoke biomass burning plants should be capped at 400 MW.

It will end subsidies for biomass burning in existing stations by 2027.

There was an outcry in May when the BBC revealed that millions of tonnes of wood were being shipped from the USA to help meet Britain's renewables targets.

Wood is classed a renewable fuel because trees soak up CO2.

Burning wood is counted as carbon-neutral, even though it takes the lifetime of a new tree to reabsorb the carbon emitted when an existing tree is burned.

Environmentalists are relieved, but say the policy should never have been approved in the first place.

The UK's biggest power station, Drax in Yorkshire, has been converting half its boilers from coal to wood. Most of this wood it burns is imported, particularly from the US.

Ed Davey, the Energy Secretary, told the BBC that biomass was a temporary solution to meet climate change targets while renewable energy systems were being developed.

“Making electricity from biomass based on imported wood is not a long-term answer to our energy needs – I am quite clear about that,” he said.

There has been fierce controversy about the sustainability of powering British homes with American wood.

Critics say that it takes 50 years or more for a new tree to absorb the CO2 released when an existing tree is burned.

But calculations by the government's chief energy scientist, David Mackay, on the carbon emissions from wood-burning are so controversial that they remain formally unpublished.

In a statement to the BBC, the energy department, DECC, now acknowledges that burning biomass in dedicated power stations offers poor value carbon savings compared with wind power or even gas.

It says it still aims to incentivise sustainable biomass burning for heat and Combined Heat and Power, which uses leftover heat to make electricity.

A DECC spokesman said in the long term, it hoped to be able to burn biomass from sustainable sources, then capture the emissions using carbon capture and storage technology. This would actually remove CO2 from the atmosphere. There will be a debate, though, over what sustainable means.

The biomass policy was largely ignored in the media until it became clear that millions of tonnes of wood would be burned. At first, the firms involved said they were only burning waste from the timber industry, mainly in the US.

An investigation by BBC News confirmed allegations by green groups that whole trees were sometimes being pelleted to be burned.

But the timber companies said those trees were being cut anyway, either as part of tree-thinning operations, or as part of forest clearance by the small private landowners who dominate forestry in the south-eastern US.

This presented a more complex picture, in which the key question was not whether whole trees were being burned, but whether biomass policies were diverting material from other uses, such as pulp and paper. The figures on this are unclear.

Harry Huyton from the RSPB said environmentalists were pleased the government was stepping back from subsidies on biomass.

“We have consistently raised our concerns around creating a large and unsustainable demand for wood for power generation in the UK because of the serious threat this poses to climate change and forest ecosystems,” he told the BBC.

“We believe that the UK should focus on building a bioenergy sector that is based on domestic feedstocks, such as wastes and arisings from forestry and agriculture.

"Recent signs that government support for large scale wood-fired power stations is cooling are welcome, but we need further action to ensure this sector develops without unacceptable impacts on our climate and wildlife.”

The Renewable Energy Association, which promotes biomass, is dismayed at the government’s change in attitude.

“It is madness for the government to have capped biomass burning at a time when we are in a capacity crunch for electricity," said the group's chief executive, Gaynor Hartnell.

"Firms that have been working hard to develop capacity have been told that only a fraction will now be needed.

“There’s been a big NGO [non-governmental organisation] backlash against biomass and we have to make sure it isn’t driven out altogether.”

Biomass, like biofuel for transport, was an apparent solution seized in haste after EU leaders in 2007 agreed that renewables would supply 20% of all energy by 2020.

The UK delegation did not realise this included oil and gas, as well as electricity, and inadvertently signed up for a near-impossible target of 15% renewables. Entrepreneurs stepped in to fill the gap and biomass will supply a large portion of the EU's target.

The government's former climate change ambassador, John Ashton, told me: "The biomass policy appeared with trace. I can't remember a single strategic discussion over how it would be deployed. It's no way to run a long-term carbon reduction strategy."