Was Ethanol Ever the Answer?

Q: What can cool the ethanol market?

Thanks to the intervention of the Environmental Protection Agency (EPA), the torrid market for ethanol credits—a linchpin of efforts to inject more corn-based fuel into the U.S. gasoline supply—may finally be set to cool, helping to contain prices at the pump.

On Friday, the agency bowed to intense pressure and cut future biofuel mandates across the board. By effectively capping the gas-to-ethanol mix at its current level of 90-10 percent, the EPA helped refiners avoid running into a "blend wall"—the point at which refiners would have been adding more biofuel to gasoline than critics contend most automobiles are mechanically capable of taking.

Goldman Sachs pointed out that the cap has an added benefit—reining in the volatile market for renewable credits, which had made it costly for gas producers to comply with requirements. Earlier this year, the market for Renewable Identification Numbers (RINs)—the credits refiners use to comply with biofuel guidelines—surged to a record high, helping to push up retail gasoline prices.

The EPA's shift creates "a new framework for setting the mandates where it actively manages annual targets by taking into account the capability to produce and blend biofuel, capping the upside to RIN prices," Goldman wrote in a research note on Monday. If the proposals pass muster during the 60-day comment period, the new framework would push prices down even further in the long term, the bank said. 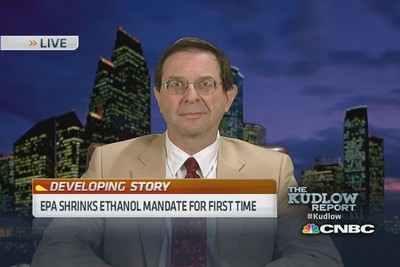 Play Video
Expecting pressure on ethanol prices: Pro
For the first time the EPA has shrunk the ethanol mandate. Andy Lipow, Lipow Oil Associates, thinks it is a big win for big oil.

In some cases, lower ethanol guidelines and less biodiesel production "implies sharply lower" RIN prices, the firm said, adding that 2014 ethanol targets "would be bearish [for] RIN prices." Still, Goldman added that "uncertainty on whether the EPA's methodology will withstand challenges will likely maintain RIN prices well above their expected lower fair value until at least mid-2014."

For months, refiners have bristled at the mandate, saying it would force them to pass higher costs along to consumers in the form of pricier gas. A bleak study cited by the American Petroleum Institute, the oil and gas industry's lobbying arm, said if left unchecked, mandates could lead to "severe" rationing, send gasoline surging by 30 percent in 2015 and shave billions off economic growth and disposable income.

"The EPA's proposal to decrease ethanol requirements will help drivers by preventing a surge in gas prices or the premature expansion of E15 gasoline sales," said Bob Darbelnet, president and CEO of AAA, in a statement. E15 is a reference to a mix that is 15 percent ethanol and 85 percent gasoline.


"While we would like to increase the use of alternative fuels, it is a plain fact that the Renewable Fuels Standard's original targets are unreachable without putting motorists and their vehicles at risk," Darbelnet added.

The relaxation of mandates was a setback for corn producers and renewable fuel advocates, most of whom championed an eventual rise of the gas/ethanol benchmark to 15 percent, from the current 10 percent. In reaction to the EPA's move, the American Coalition for Ethanol blasted the relaxed standard as a bow to the oil and gas lobby.