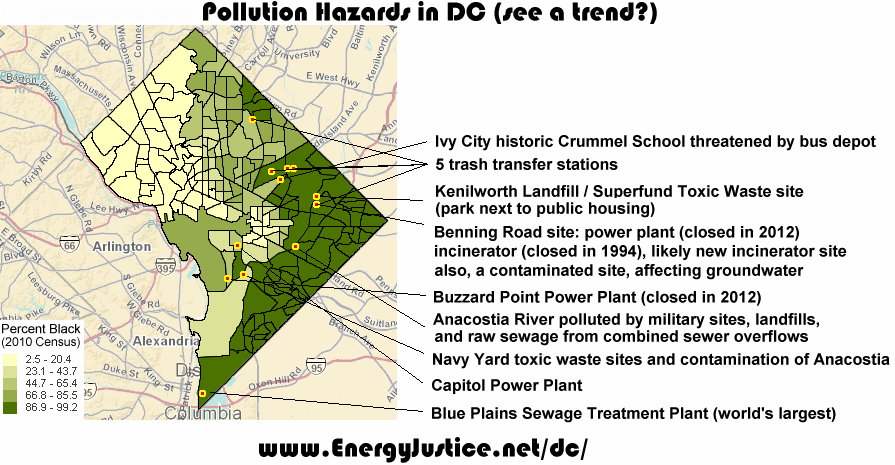 Benning Road - hosted the city's trash incinerator from 1972-1994; hosted the oil-fired Pepco power plant that shut down in June 2012, leaving behind a toxic waste site around which is a current struggle over how the cleanup will go; hosts one of the city's two trash transfer stations, and around 2012-2013, was the only likely location for a new incinerator being considered by city officials.  See our factsheet on trash incineration.

Kenilworth Landfill - right next to Benning Road site; Superfund site that National Park Service plans to "clean up" by dumping a couple feet of soil on it

Brentwood and Langdon - hosts all three of the private trash transfer stations in the city: Federal IPC, Rodgers Brothers, and WMI Northeast  .

Blue Plains - hosts the world's largest "advanced" sewage treatment plant; the toxic sludge is dumped on farm fields in the region and some might be used to grow "energy crops" for burning as renewable energy

Southwest / Buzzard Point – proposed DC United soccer stadium on toxic waste sites that won’t be fully cleaned up; proposed Pepco electrical substation adjacent to African-American community, to serve electric needs of gentrifying Waterfront neighborhood; Buzzard Point hosts the other main (oil-fired) Pepco power plant, also shut down in 2012, but not torn town like the one at Benning Road was; other noxious facilities in that SW DC neighborhood as well, including scrapyards and concrete facilities, and possible illegal waste burning

Anacostia - combined sewer overflows affect the river, with raw sewage dumped into rivers when it rains (same for Potomac, actually, but the Anacostia gets most of the attention)

City-wide - water fluoridation - toxic waste being added to the water, pretending it's good for teeth (it's not), but makes the lead in water problem worse and disproportionately affects black and Hispanic residents in terms of lead exposure

City-wide - energy policy - DC's renewable energy law supports many polluting technologies, like the burning of biomass, black liquor (toxic paper mill waste) and toxic landfill gases.  The city gets it normal power from coal, nuclear and gas in the region, which is also a problem.  A new gas-fired power plant to serve the region is targeting the black community of Brandywine, MD in southern Prince George's County.  Also, fracking for natural gas is threatening the George Washington National Forest, which could contaminate DC's drinking water.

City-wide - waste policy - The largest recipient of DC waste is the trash incinerator in the community of color in Lorton, VA (Fairfax County).  The city, as part of its Sustainable DC program, is conducting a $300,000 study of waste management options, with a heavy focus on "waste-to-energy" (incineration).  See our article on DC's Waste and Environmental Racism