Prince George’s County, MD is the wealthiest black county in the nation.  Fitting the national trends, certain polluting industries not desired in white communities are overrepresented in the county.

VICTORY! In August, 2016, the county pulled the plug on the "waste-to-energy" contract we've been fighting (described below). See our article on the victory. We're now working on getting the county's plans for zero waste to be done right. 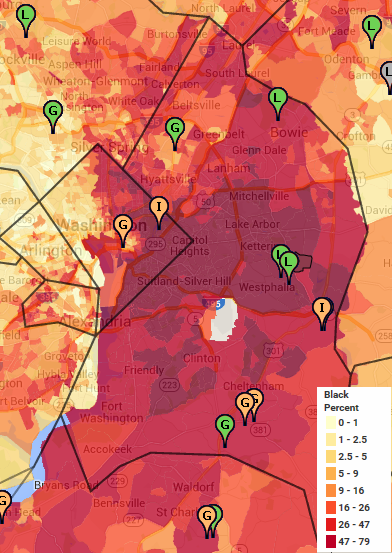 New trash incinerator?  The sludge incinerator site is also the likely site of any new incinerator or trash pelletization plant the county is seeking through the RFQ they put out in late 2014. This is to replace the landfill on the other side of Upper Marlboro, which is scheduled to fill up in 2021.

Instead of expensive and polluting "waste-to-energy" schemes, the county ought to reduce, reuse, recycle and compost at least 90% of its waste. Any remainder should be digested and shipped to area landfills.

TEN TIMES as many jobs can be created with a “zero waste” approach that maximizes reducing waste, repairing and reusing things, recycling and composting.

Get in touch to receive updates, as we add content to this page and alert residents about meetings and opportunities to get involved.  Email Don't Burn Prince George's or call 301-836-1405 to get plugged in with local community environmental leaders.

These are all in an area where air quality is already considered unacceptable, as the EPA has declared the counties to be in "non-attainment" for ground-level ozone pollution.  This pollution will be made much worse by having more power plants in the area.  Breathing ozone can trigger a variety of health problems including chest pain, coughing, throat irritation, and congestion. It can worsen bronchitis, emphysema, and asthma, according to EPA's page on ozone health effects.

The Brandywine/Waldorf region is being targeted for a cluster of 5 fossil fuel power plants. They are:

To get involved, get in touch with Clean Air Prince George's.  To learn more, see our powerpoint and factsheet about gas power plants, and explore our page on natural gas.