The following is the section on Coal-bed Methane excerpted from Oil and Gas at Your Door? -- A Landowner's Guide to Oil and Gas Development, reprinted with permission from a report published by the Oil & Gas Accountability Project.

According to the CBM Association of Alabama, 13% of the land in the lower 48 United States
has some coal under it, and in all coal deposits methane is found as a byproduct of the coal
formation process. Historically, this methane was considered a safety hazard in the coal mining
process and was purposely vented to the atmosphere. Recently, however, companies have
begun to capture the methane found in coal mines, as well as recover methane from coalbed
deposits that are too deep to mine.154

Coal beds are an attractive prospect for development because of their ability to retain large amounts of gas -- coal is able to store six to seven times more gas than an equivalent volume of rock common to conventional gas reservoirs.155 On a daily basis, however, CBM wells typically do not produce as much gas as conventional wells.156 In most regions of the U.S., coalbed methane wells produce between 100 and 500 thousand cubic feet (Mcf) per day, while the average conventional well in the lower 48 states produces approximately 1.7 million cubic feet (MMcf) per day.157 There are, however, some extremely productive coalbed methane areas, such as the San Juan basin in Colorado and New Mexico, where some wells produce up to 3 MMcf of methane per day.158

The amount of methane in a coal deposit depends on the quality and depth of the deposit. In general, the higher the energy value of the coal159 and the deeper the coal bed, the more methane in the deposit.160

Methane is loosely bound to coal -- held in place by the water in the coal deposits. The water contributes pressure that keeps methane gas attached to the coal. In CBM development, water is removed from the coal bed (by pumping), which decreases the pressure on the gas and allows it to detach from the coal and flow up the well. 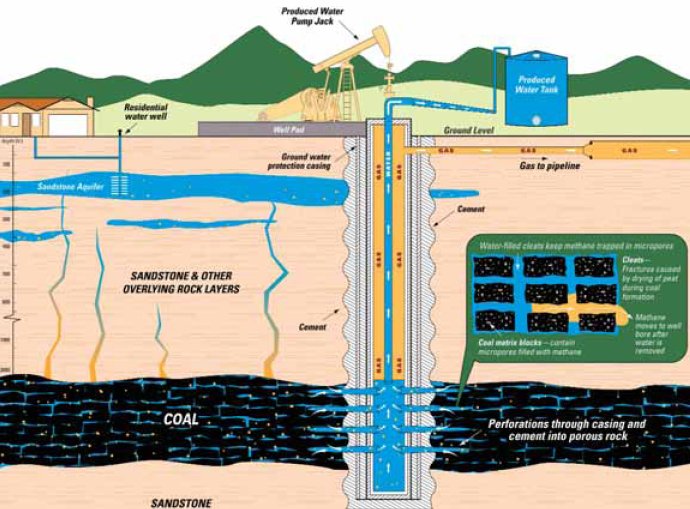 In the initial production stage of coalbed methane, the wells produce mostly water. Eventually, as the coal beds near the pumping well are dewatered, the volume of pumped water decreases and the production of gas increases.161 Depending on the geological conditions, it may take several years to achieve full-scale gas production. Generally, the deeper the coal bed the less water present, and the sooner the well will begin to produce gas.

Water removed from coal beds is known as produced water. The amount of water produced from most CBM wells is relatively high compared to conventional gas wells because coal beds contain many fractures and pores that can contain and move large amounts of water.162

CBM wells are drilled with techniques similar to those used for conventional wells. In some regions where the coal beds are shallow, smaller, less expensive rigs, such as modified water-well drilling rigs, can be used to drill CBM wells, rather than the more expensive, specialized oil and gas drilling rigs.163

As with conventional gas wells, hydraulic fracturing is used as a primary means of stimulating gas flow in CBM wells.164 Another gas stimulation technique, unique to CBM wells, is known as cavitation (also known as open-hole cavity completion).

Cavitation is a similar phenomenon to opening a shaken pop bottle, only on a much larger scale.165 Water, and air or foam are pumped into the well to increase the pressure in the reservoir. Shortly thereafter, the pressure is suddenly released, and the well violently blows out, spewing gas, water, coal and rock fragments out of the well. This action is sometimes referred to as "surging," and it is accompanied by a jet engine-like noise, which can last up to 15 minutes.166

The coal fragments and gas that escape from the well are directed at an earthen berm, which is supposed to prevent the materials from entering the greater environment. The gas is burned or flared, and the coal fines and fluids initially collect in a pit at the base of the berm. Some loose rock and coal materials remains in the well. They are cleaned out by circulating water (and often a soap solution or surfactant) within the well and pumping the material into a pit. The coal refuse is then typically burned on-site in a pit, which is either referred to as a "burn pit" or "blooie pit."

The cavitation process is repeated several dozen times over a 2-week period.167 This results in an enlargement of the initially drilled hole (well bore) by as much as 16 feet in diameter in the coal zone, as well as fractures that extend from the well bore.168 If the cavitation fractures connect to natural fractures in the coal, they provide channels for gas to more easily flow to the well.

At the present time, cavitation is not widely practiced. The U.S. Department of Energy reported that in 2000, the only "cavity fairway" in the United States was located in the central San Juan Basin, in Colorado and New Mexico.169 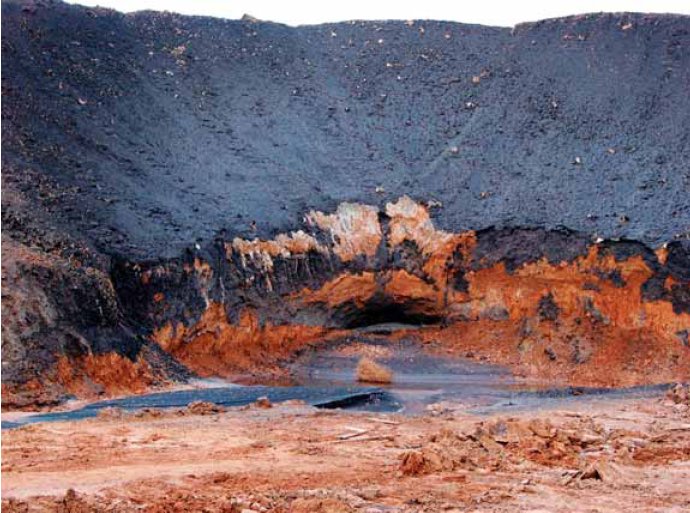 Depending on which state you live in, produced water may be: discharged onto land, spread onto roads, discharged into evaporation/percolation pits, reinjected into aquifers, discharged into existing water courses (with the proper permit), or disposed of in commercial facilities. In some states, standards for produced water disposal are becoming more rigorous, and certain disposal practices are losing favor. Surface discharge, for example, is a controversial method of disposal, as it can lead to a build-up of salts and other substances in the soil, and affect the productivity of the land. In some states, re-injection is the only option for disposal.171 See section on Impacts Associated with Oil and Gas Operations for more information on produced water disposal options.

In some areas, coal beds may be important local or regional aquifers (natural underground water storage zones), and important sources for drinking water.172 It is important, therefore, that landowners find out how companies are planning on disposing of produced water, and what impact its removal and disposal might have on water supplies.

A study conducted by the US Environmental Protection Agency (EPA) documents a number of examples of water quality impacts and other issues encountered after CBM extraction occurred.173 These include reported incidents of: 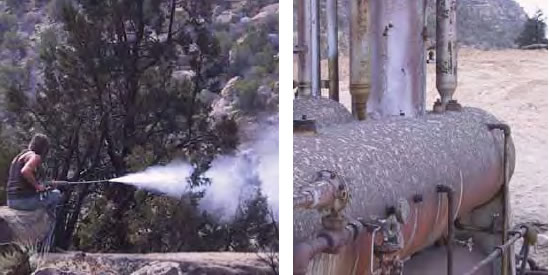 A worker attempts to remove coal dust from trees.

A decline in water quality may be created by hydraulic fracturing fluids. The EPA has stated that

"if coalbeds are located within underground sources of drinking water (USDW), then any fracturing fluids injected into coalbeds have the potential to contaminate the USDW. Stimulation fluids in coal penetrate from 50 to 100 feet away from the fracture and into the surrounding formation. In these and other cases, when stimulation ceases and production resumes, these chemicals may not be completely recovered and pumped back to the coalbed methane well, and, if mobile, may be available to migrate through an aquifer."174

Rural residents across the country have experienced decreases in the levels of their drinking water wells, as well as the drying up of springs.175 Monitoring wells maintained by the federal Bureau of Land Management in the Powder River Basin of Wyoming/Montana have indicated a drop in the aquifer of more than 200 feet.176 Estimates are that the water levels could drop to
a total of 600-800 feet over the course of CBM development in that basin.177

The EPA has reported the spontaneous combustion and continued burning of completely dewatered coalbeds as a concern related to CBM development.178 When water is pumped out of coal seams, coal becomes exposed to oxygen, and coal fires are possible. This can occur spontaneously, or from lightning strikes or ignition by grass fires or wildfires. The areas most likely to be the site of a coal fire are along the edges of basins where coal is close to the surface and oxygen can most easily enter the coal when water is removed. At least one coal fire is burning north of Sheridan, Wyoming. This old fire could expand as dewatering lowers the groundwater level (thus exposing more coal to oxygen).179 If coal fires occur, by-products, such as polycyclic aromatic hydrocarbons (PAHs), from the underground fires could potentially lead to contamination of underground sources of drinking water.180

Water is part of the fabric of a geologic formation -- it holds the rock open. When water is removed from the rock, the pore spaces are left open, and the rock can collapse. In parts of the world, there have been incidents where enormous quantities of water have been removed from shallow aquifers, followed by as much as a 40-foot drop (or subsidence) in the surface of the land. The consequences of the subsidence have included the rupturing of utility lines (gas, sewage, water, electric), collapse of buildings, and damage to roads.181

From exploration through site abandonment, noise is generated by truck traffic, heavy equipment, seismic explosions, drilling rigs, motors that power pumps, and gas compressors. The noise from all of the equipment may be a frustration for landowners. The constant noise from pumps and compressors, however, can greatly affect a landowner's quality of life, and have negative impacts on livestock and wildlife.

The coal brought to the surface (100 tons on average) during cavitation is burned on site, which can last anywhere from 7 to 10 days. The pollution from burning this waste coal can be a concern for nearby residents, especially because oil and gas well "completion techniques" like cavitation are largely unregulated (e.g., they are exempt from certain environmental laws like the Clean Air Act).

It is possible that coal debris could find its way into local drinking water wells. The underground explosions are not contained, and consequently, could come in contact with groundwater flows.

A study in LaPlata County, Colorado, found that the location of a coalbed methane well on a property at the time of sale led to a net reduction in selling price of approximately 22%.184

Decline in property values of 22%