Nuclear power is an expensive, polluting, dangerous, racist, depletable, and now foreign source of energy. 80-90% of uranium used in the U.S. is imported from Canada, Australia, the former Soviet Union and Africa.1 At the current consumption rate, low-cost uranium reserves will be exhausted in about 50 years.2

Uranium Mining
The nuclear chain begins with uranium mining, a polluting activity that devastates large areas. Uranium ore can contains as little as 500 grams recoverable uranium per million grams of earth. 3 Enormous amounts of rock have to be dug up, crushed and chemically processed to extract the uranium.

The remaining wastes, still containing large amounts of radioactivity, remain at the mines. These "tailings" are often stored in a very poor condition, resulting in the contamination of surface- and groundwater.

Nuclear Weapons
Depleted uranium (DU) is the U-238 waste product that has been “depleted” of U-235. DU has been used to make armor piercing bullets, tank shielding and more. When used in warfare, DU bursts into flames upon impact, spreading uranium dust into the environment. DU is radioactive for billions of years and hundreds of tons of it have contaminated Iraq, Afghanistan, Bosnia and testing locations like Vieques, Puerto Rico. It’s the primary culprit in Gulf War Syndrome and many other health problems.5

The same process used to make reactor fuel can be used to highly enrich uranium for nuclear bombs. This is why nuclear power programs have led to nuclear weapons programs in other countries.

Pollution in the Nuclear Fuel Cycle
Many steps are required to make uranium suitable for use in nuclear reactors. From mining to milling to conversion to enrichment to fuel fabrication, each step involves separate facilities throughout the U.S. poisoning communities with radioactive and chemical pollution (mostly in western and mid-western states).

Global warming
While the nuclear reactors themselves release few greenhouse gases, the nuclear fuel cycle is a significant contributor. In 2001, 93% of the nation’s reported emissions of CFC-114,6 a potent greenhouse gas, were released from the U.S. Enrichment Corporation, where uranium is enriched to make nuclear reactor fuel. These facilities are so energy intensive that some of the nation’s dirty, old coal plants exist just to power the nuclear fuel facilities.7 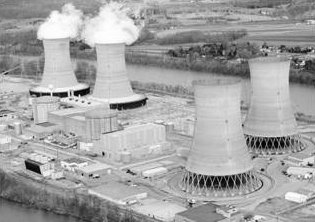 Living near a nuclear facility increases your chances of dying from breast cancer. A nationwide survey of 268 counties within 50 miles of 51 nuclear reactors, found breast cancer deaths in these "nuclear counties" to be 10 times the national rate from 1950 to 1989.9

In the 7 years after the closure of 8 nuclear reactors, infant mortality rates (deaths to infants under 1 year of age) fell dramatically in downwind communities.10

Strontium-90, a radioactive pollutant now released only from nuclear reactors, ends up in milk and bones, contributing to bone cancer and leukemia. Studies of Sr-90 in baby teeth found levels 30-50% higher in teeth of children living near reactors.11 Background levels are rising with continued use of nuclear reactors, rising to levels comparable to when atmospheric nuclear bomb tests contaminated the nation in the 1940s and ‘50s. Levels in the teeth of babies born in the late 1990s are about 50% higher than those born in the late 1980s.

Of the 7 areas examined so far in the baby tooth studies, the highest Sr-90 levels have been found in southeastern PA – around the Limerick reactor.

Living near reactors is also correlated with increases in leukemia and childhood cancer.

Water Use: Harming Wildlife
Reactors require huge amounts of cooling water, which is why they’re often located near rivers, lakes or oceans. Reactors with cooling towers or ponds can use 28-30 million gallons of water per day.12 The 48 reactors with once-through cooling systems use far more (up to 1.5 billion gallons per day). A typical two-unit reactor using once-through cooling takes in about a square mile of water, 14 feet deep, each day.

The initial devastation of marine life and ecosystems stems from the powerful intake of water into the nuclear reactor. Marine life, ranging from endangered sea turtles and manatees down to delicate fish larvae and microscopic planktonic organisms vital to the ocean ecosystem, is sucked irresistibly into the reactor cooling system. Some of these animals are killed when trapped against filters, grates, and other structures, or, in the case of air-breathing animals like turtles, seals, and manatees, they drown or suffocate.13

An equally huge volume of wastewater is discharged at temperatures up to 25 o F hotter than the water into which it flows. Indigenous marine life suited to colder temperatures is eliminated or forced to move, disrupting delicately balanced ecosystems.

High-level nuclear waste (also called irradiated or “spent” fuel) is literally about one million times more radioactive than when the fuel rods were loaded into the reactor. This waste is so lethal that standing near it without shielding would kill you within minutes. This waste will be hazardous for millions of years. No technology exists to keep it isolated this long. Irradiated fuel rods are stored in storage pools inside reactor buildings, often several stories high, where they’re highly vulnerable to aircraft attacks.14 If the water is drained from the pool, exposing the rods to open air, a meltdown would cause a massive release of radiation. Some utilities have begun storing this waste in dry casks on outdoor concrete pads in the backyard of the reactors, introducing separate storage, packaging and security problems.

A permanent “disposal” site planned for Yucca Mountain, Nevada has many problems. It’s far from where most waste is produced, requiring unprecedented numbers of shipments through 43 states, risking accidents and attacks. Yucca Mountain is on Native American lands and is too leaky to keep the waste dry.15 The site is amid active fault lines and is too small to store the amount of waste that would be generated by the time it opens (if it ever does). Currently, a site on Native lands in Utah is proposed to store the waste “temporarily.” 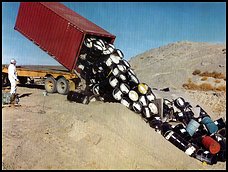 “Low-level” radioactive waste (LLRW) is defined as all other radioactive waste from reactors, regardless of radioactivity levels or health hazards. Large amounts of this waste have been dumped or burned. Six official LLRW dumps exist in the U.S. All are leaking, contaminating groundwater.16

Too Expensive
Nuclear power is the most expensive form of power and could not exist with massive subsidies, including the “Price-Anderson” law that places a cap on industry liability in the event of a nuclear accident.

Fusion
Fusion still produces nuclear waste, including tritium, a very dangerous, hard-to-contain air and water contaminant.18 Like fission, it would be very expensive and highly centralized. Despite massive research spending, it’s still decades away from reality. The same money spent on clean solutions (conservation, efficiency, wind and solar) would do far more.