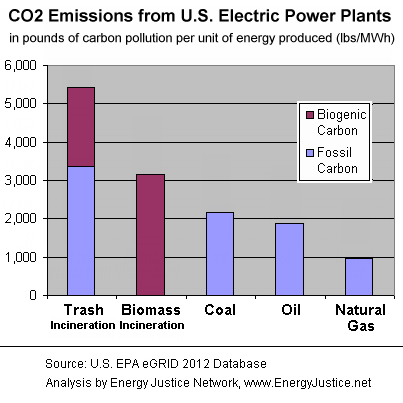 Letter from 90 Scientists to Congressional Leaders urging that biomass global warming emissions be accounted for properly (May 17, 2010)

Wood Based Bioenergy: The Green Lie The impact of wood-based bioenergy on forests and forest dependent people (May, 2010). Prepared by the Global Forest Coalition.

Because biomass has a lower heating value than fossil fuels, burning biomass emits more carbon dioxide than coal or natural gas per unit of energy produced. Biomass has also been found to emit more nitrogen oxides (NOx) and particulate matter (PM) than coal and natural gas. See this comparison of facilities in Massachusetts: Biomass and C&D are dirtier than coal

Biomass incineration is devastating to forest ecosystems. While trees may technically be "renewable" in the sense that they regrow, forest ecosystems are not renewable in a short time frame. For more information on the threats of biomass to forests, see:

Biomass Incinerators Not Good for Jobs

Biomass incinerator planned for your community?

Biomass incineration is one of the most expensive, inefficient and polluting ways to make energy -- even dirtier than coal in some ways. Forests are destroyed, the climate is cooked, crop lands are wasted, resources are destroyed and low-income communities and communities of color suffer increased health problems from this unnecessary dirty energy source that poses as renewable energy.

Bioenergy is an umbrella term for "biomass" (incineration for electricity or heating) and "biofuels" (converting to liquids for burning as transportation or heating fuels). The biomass term has meant burning of: municipal solid waste (trash), tires, construction & demolition (C&D) wood waste, trees, crop and animal wastes (primarily poultry waste), energy crops, gas from digestion of sewage sludge or animal wastes, and landfill gas. Burning "green" biomass (trees or crops), while quite polluting, is often a foot in the door for even more toxic and profitable waste streams like trash and tires.

Biomass is dirtier than most fossil fuels, but is considered renewable, competing for subsidies with true renewables like wind and solar. As we move away from coal, biomass is increasingly being sought out as an alternative (even chipping our forests to ship to Europe for burning), thanks to misguided renewable energy and climate policies that fail to recognize that biomass is worse than coal for the climate.

Biomass incineration releases the same types of pollutants as coal burning, including carbon monoxide (CO), carbon dioxide (CO2), particulate matter (PM), nitrogen oxides (NOx), sulfur dioxide (SO2), dioxins/furans, acid gases, radioactive pollutants and toxic metals like arsenic, chromium and mercury. For some pollutants, biomass air pollution can be worse than emissions from coal-burning, depending on the types of biomass and coal, and the pollution controls required. New biomass incinerators are not held to the same air pollution control requirements as new coal power plants are. Ash from biomass incineration concentrates high levels of toxins, but instead of being handled as hazardous waste, it's often sold as farm fertilizer, entering the food system.

A 2012 Wall Street Journal investigation found that 85 of 107 operating biomass incinerators were cited for violating air or water pollution laws in the previous five years. Fires and explosions are far too common at the incinerators themselves, their wood piles and in transportation. The extensive transportation needed to supply low-energy biomass fuels also releases diesel exhaust and more climate pollution.

Numerous organizations representing health and medical professionals have issued statements opposing biomass incineration due to health concerns. The American Lung Association "does not support biomass combustion for electricity production," "strongly opposes the combustion of wood and other biomass sources at schools and institutions with vulnerable populations," and even "encourages individuals to avoid burning wood in homes where less polluting alternatives are available."

The American Academy of Family Physicians, out of concern about poultry waste incinerators proposed in North Carolina, stated: "We believe that the proposed biomass burning facilities pose a serious risk to the health of patients. Current research... indicates that the burning of poultry litter and wood wastes... leads to increased risk of premature death and serious chronic illnesses: The plants additionally will have a negative impact on the health of our patients through emissions of nitrogen oxides, sulfur dioxides, arsenic, mercury and dioxins, all of which link directly to respiratory, brain, kidney, heart and thyroid diseases; cancer; diabetes mellitus; neurotoxicity; developmental delays in children and disruptions In fetal development. These emissions will have an adverse effect on the health of the most vulnerable North Carolinians: developing fetuses, newborns, children; those with chronic Illness and the elderly. The result of bringing these biomass burning facilities online will be increased disability and disease, which will lead to increased medical costs." Find this and other letters from health professionals here.

Biomass incineration releases 50% more carbon dioxide (per unit of energy produced) than coal burning. Proponents claim that biomass is "carbon neutral" because trees suck up the extra CO2, but this is not true within any meaningful time frame to address climate change, while some studies demonstrate a "permanent" increase in atmospheric carbon. Studies show that it takes at least 40 years for trees to absorb the extra pulse of CO2, making biomass only as bad as coal power plants -- and hundreds of years to become "carbon neutral." Climate scientists insist we don't have that long to prevent runaway climate change. While we do not support burning fossil fuels, from a strictly carbon perspective, it makes more sense to burn coal and plant trees than to burn trees and plant trees. The faulty "carbon neutral" notion also relies on the assumption that trees are replanted at all (not true for all types of biomass) and that they're left alone and not subsequently cut back down to burn again.

Forest biomass puts unacceptable pressure on forests. While trees are technically renewable, forest ecosystems are complex systems that are not so easily renewed. Crop-based biomass also impacts land and water, depleting soil, requiring chemicals and fertilizers, and impacting water supplies. Biomass chews up far too much land for relatively small amounts of energy. The industry is increasingly looking toward invasive species and genetically modified trees and crops for biomass feedstocks, risking genetic pollution, increased herbicide use and untold ecological impacts. Cellulosic and algae biofuels seek to genetically modify enzymes and algae, putting the very base of the life system at risk.

Biomass is the second most expensive form of electric power generation to operate and maintain, second only to trash incineration. Since biomass incineration is so uneconomical, numerous subsidies are often needed under renewable energy, agriculture and other laws. Biomass creates very few jobs per dollar invested and is a poor use of woody resources, creating far fewer jobs burning those resources as compared to using them to build useful goods. Transportation costs are also higher than other fuels, since biomass isn't an energy dense fuel and often must be trucked and shipped around with diesel vehicles in large amounts.

Biomass proponents argue that biomass is needed as a rewnewable energy source since it provides "baseload" power (power that can run most of the time), as opposed to intermittent wind and solar. However, studies have shown that wind, solar and energy storage can provide all of our electricity needs and do so cheaper and with 99.9% reliability.